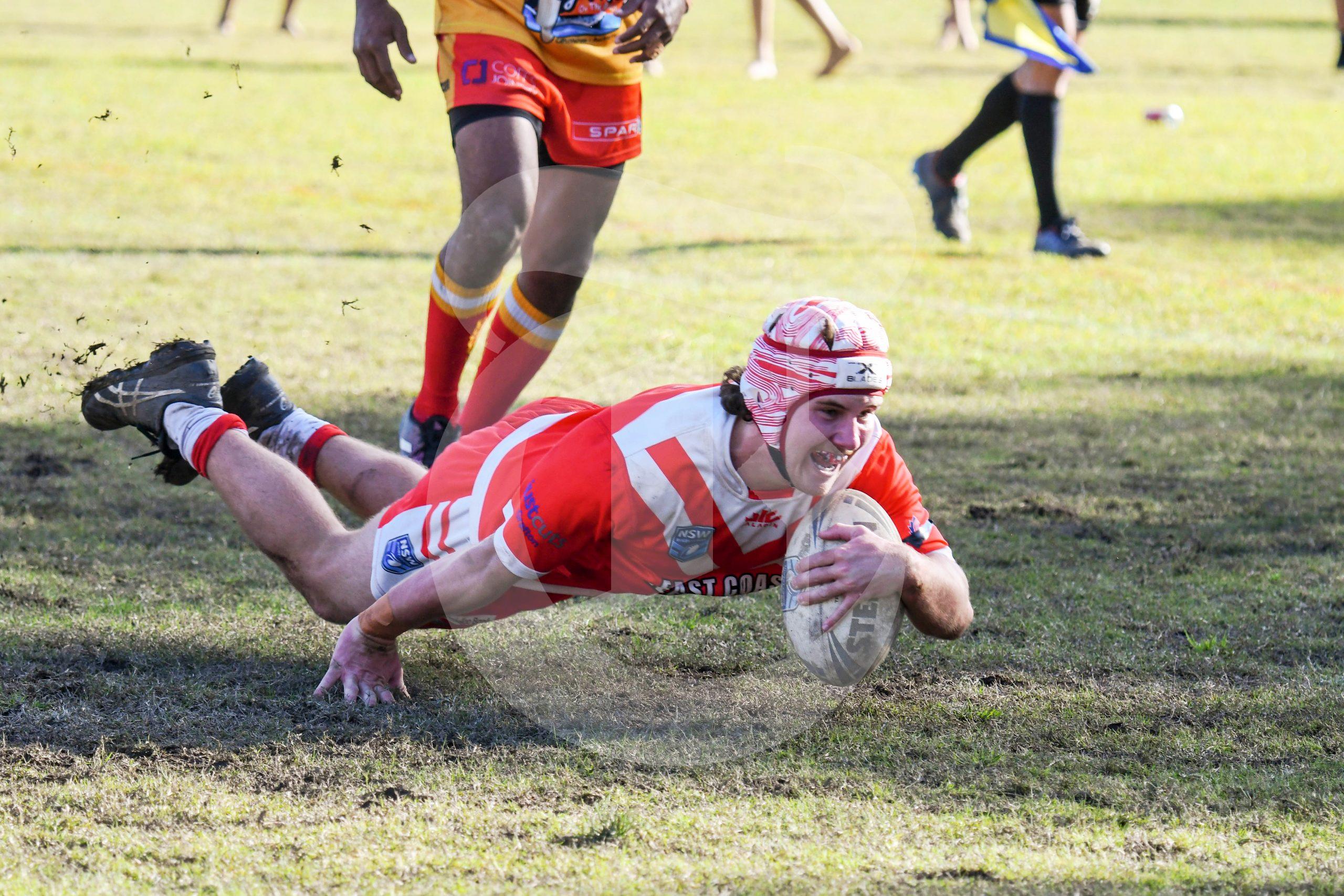 Rebels bring Comets down to earth

The South Grafton Rebels have slammed the door on the Coffs Harbour Comets’ Group 2 rugby league semi-final hopes with a 40-12 drubbing at McKittrick Park on Sunday.

Pre game the players and crowd held a minute’s silence in memory of artist and community figure Irene Daley, who died earlier this week.

The Daley name has featured strongly in the Rebels playing roster over the years and Mrs Daley’s son, country music star Troy Cassar-Daley sang the national anthem at the 2016 grand final between the Rebels and Grafton Ghosts.

On Sunday Rebels winger Brian Quinlin-Randall, who had an outstanding game, was the latest member of the family to turn out for the Rebels.

The Comets flared briefly in either half, snatching the lead in the opening minutes of the game with an opportunist try to halfback Joey Cudmore and for a brief period in the second half when skipper Nathan Curry scored a well-worked try to get the score to 22-12. But apart from that the Rebels, with star veterans Hughie Stanley and Grant Stevens leading the way, dominated all facets of the game. But not far behind them were a bunch of young guns like halfback Jordan Gallagher and brothers Nick and Tom McGrady and Quinlin-Randall

Their opening score was a piece of Stanley magic when the big number 6 surged toward the line from 20m out then squeezed a pass to Lewis Cooper backing up on the inside, who crashed over.

Nick McGrady brought the scores level with the conversion. A crucial call came a few minutes later when massive Comets prop Peter Wong appeared to crash over near the sticks.

Instead the referee awarded a penalty for a double movement and the Rebels swept play downfield. Minutes later Gallagher was in for a try after a clever interplay of passes from a tap restart gave him a clear run to the line. Another crucial moment in the game was the sin-binning for backchat of Comets halfback Cudmore 13 minutes before half time.

The Rebels, 10-6 up, piled on the pressure and second rower Thomas Walker punched a hole in the defence. From the play the ball a short pass put a rampaging Tom McGrady under the posts.

The Comets almost paid double when a massive Austin Cooper run secured 70m of territory. Running onto a pass from the kick catcher Cooper smashed through the first up tackles then headed up field, pulling free of desperate cover defenders as he surged forward.

Poor ball security soon after cost the Rebels a scoring chance, but they kept applying pressure. A teasing Stanley kick drew a mistake from the Comets winger which the home team duly punished with a second try to Thomas McGrady.

In the second half the Comets rallied on the back of an extended period of possession and their skipper put them back in the game with a neatly taken try on the left edge. His successful conversion put the score at 22-12 to the Rebels with a comeback possible. But the Rebels soon snuffed that out when centre Aidan Hyland after some slick passing put him range of the line and he stretched out an arm to score. From there it came a procession. Stanley twice more to take the score to 40-12. Under-18s star Waylon Caldwell came on to take the kicking duties from Nick McGrady and kicked three from three.

After the game Rebels coach Ron Gordon was delighted with his team’s combination of slick attack and solid defence. The Rebels have not tasted defeat since May and after the game Gordon said a second place finish was possible if results went their way. They have beaten all the top four teams as they charged up the ladder and now share third spot with the  Grafton Ghosts. But the Rebels ahead on points difference and with a game in hand against Macksville have the most capacity to change the look of the table.

The Ghosts edged out competition leaders Woolgoolga 26-24 to continue their rebound to form after a dismal mid-season slump. But with the Rebels facing cellar dwellers, Nambucca in the last game and the Ghosts hosting a Macksville team desperate to get back into the top four, things can change quickly.

Related Topics:Rebels bring Comets down to earth
Up Next

ONE YEAR TO FIFA WOMEN’S WORLD CUP KICK OFF 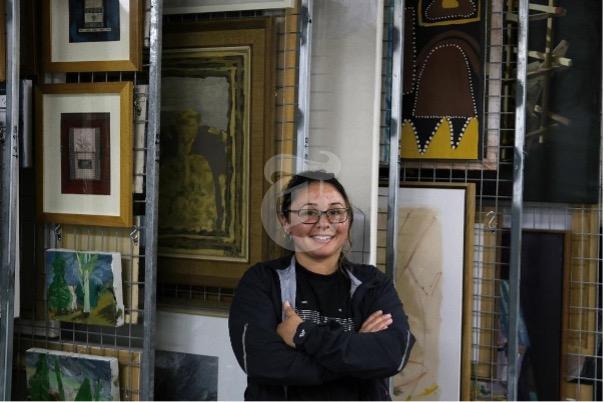 After seeking expressions of interest, Coffs Harbour City Council is excited to announce Tori Donnelly as First Nations Curator to lead the development and delivery of Yaam Gumbaynggirr Jagun: Here is Gumbaynggirr Country – the working title of one of the first exhibitions to open in the new Yarrila Arts and Museum (YAM).

After a competitive process, Donnelly was selected and will work with up to ten Gumbaynggirr artists to bring this to life.

Donnelly is an artist and curator with connections to Gumbaynggirr and Bundjalung Country. Awarded Young Artist of the Year in 2018, her artwork embraces both traditional and contemporary art practices while expressing her spiritual and cultural beliefs.

Currently working at the Yarrawarra Aboriginal Cultural Centre, Tori has made a significant contribution to the cultural fabric of the Gumbaynggirr region having been involved in curating exhibitions such as Salt Water Fresh Water for the Saltwater Freshwater Arts Alliance, and as a contributing artist to the The White Bluff Project for the Coffs Harbour Regional Gallery.

“I am excited for the opportunity to work on this project and humbled to be selected as a representative to the Gumbaynggirr community in this role,” said Donnelly.

“I hope that we can shine a light on our continuous ownership of culture through art.”

Chris Chapman, Council’s Director Sustainable Communities added; “This is a really important art exhibition for the city of Coffs, so I’m thrilled that we’ve been able to secure someone of Tori’s expertise and standing in the Gumbaynggirr community.

“I’m sure what she’ll be able to achieve with our local first nations artists will blow us all away as we walk through the doors of Yarrila Arts and Museum for the first time!”

Yaam Gumbaynggirr Jagun: Here is Gumbaynggirr Country is a separate project to the Gumbaynggirr Art Trail that will wind its way through the new building and animate the different public spaces. 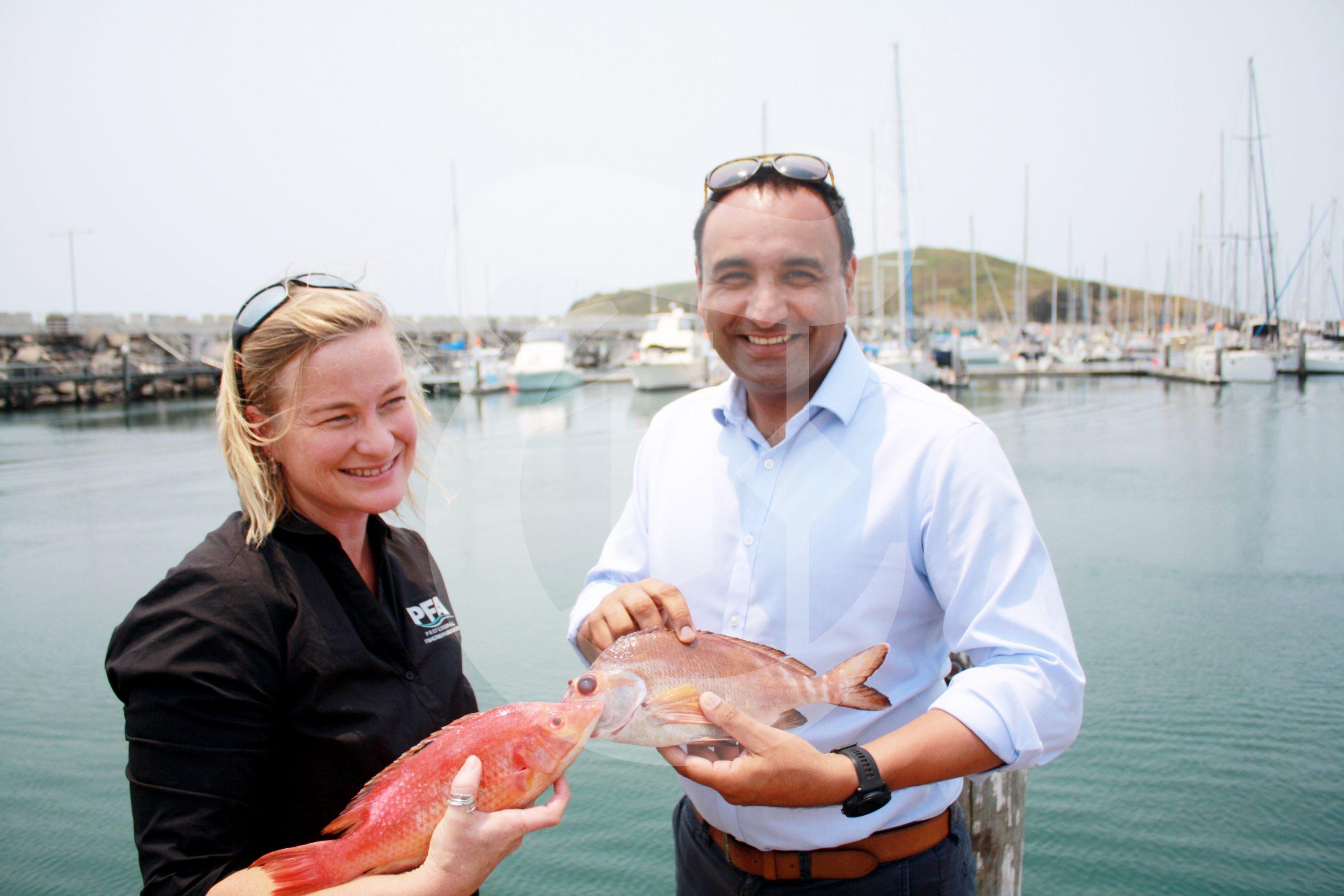 The Coffs Coast can celebrate our seafood industry in style with the launch of a series of festivals under the NSW Government’s Eat More Seafood Grants Program.

The Coffs Harbour region and all it has to offer will take centre stage when the Taste of Seafood Festival arrives in May, 2023.

“They will also teach people about the importance of sustainable fishing and aquaculture and the immense value of buying local.

“The seafood industry makes a massive contribution to the NSW economy but has endured tough times recently with drought, bushfires, the pandemic and floods. The festivals are the perfect opportunity to support our fishers.”

CEO of the Professional Fishers Association Tricia Beatty welcomes the NSW Government’s support of the industry.

“The hard-working commercial fishers across NSW proudly provide a large variety of sustainable, high quality seafood and these events will give them a stage to showcase their expertise to regional communities,” Ms Beatty said.

The Eat More NSW Seafood Program is a partnership between the NSW Government and the NSW Seafood Industry Council to promote the consumption of NSW seafood and help foster greater community awareness and support for the industry.

For more information on the festivals go to: www.tasteofseafood.com.au

After decades working in health promotion, Colin Cowell was equipped with all the knowledge of stroke symptoms, but it was his friend who recognised he was having one. In May 2015, while packing to move houses, Colin started to feel exhausted, had weakness in his right arm and trouble speaking. He dismissed it but a fast-thinking mate standing nearby knew something was not right. “My mate Billy, noticed I was holding my arm and that I was having trouble speaking. He knew straight away that I was having a stroke and acted quickly to get me to hospital.” Colin was in a specialist stroke unit within 15 minutes and soon after had emergency stroke treatment. He learnt how to walk and talk again and was released a few weeks later. Now ,seven years on, he is still passionate about health, acting as a mentor to a 100 % Aboriginal-owned , Claystone Marketing, which provides communications strategies to medical services who need to promote healthy lifestyles for Indigenous communities

Reflecting on his journey, the 72-year-old attributes his ‘good’ recovery to his mate’s knowledge of the F.A.S.T signs of stroke and receiving immediate specialist treatment. “Billy saved my life and his fast actions meant I could get to a great hospital faster for emergency specialist treatment which in turn led to a better recovery. If there’s one word or four letters of advice I can give anyone, it’s learn the F.A.S.T acronym.” Every year, Stroke Foundation surveys thousands of Australians on their awareness of the signs and risks of stroke. The most recent F.A.S.T survey of 5000 people revealed only 49 per cent of residents in Colin’s electorate of Page could recall at least two of the F.A.S.T signs of stroke – a figure Stroke Foundation is working hard to increase through awareness and community education. “Stroke Foundation Chief Executive Officer, Sharon McGowan, says if just one person in every household and workplace knows the F.A.S.T acronym, it can make all the difference.

That goal is possible with the community’s help. As we saw with Colin, the person standing next to him knew the signs and was able to act quickly and get him the emergency treatment he needed.” Ms McGowan is urging all Australians to know the F.A.S.T acronym which stands for Facial droop, inability to lift both Arms, slurred Speech and Time – meaning that if you see any of these signs call triple zero (000) straight away.

Sharing that message may just save a life, she says. Media contact: m)0408 000 409 e) media@strokefoundation.org.au

“When a stroke strikes, up to 1.9 million brain cells die every minute so time is of the essence when it comes to getting emergency medical treatment. The faster people can recognise the signs of stroke, the faster they can get specialist treatment which in turn leads to better recovery and health outcomes for the patient.”