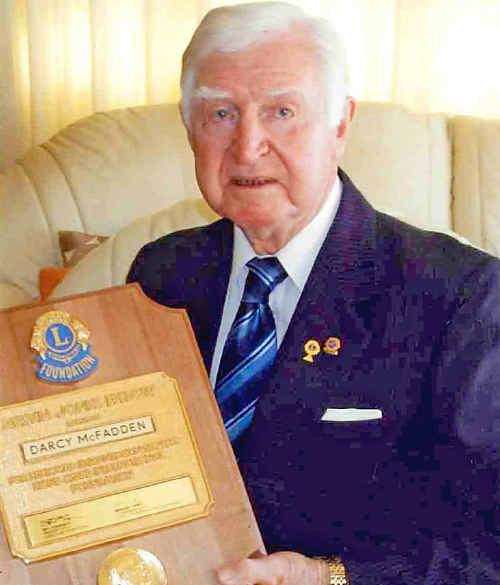 MORE than 1000 outstanding Australians have been listed on the Queen’s Birthday Honours List for 2021, including several Northern Rivers residents.
The late Darcy Mcfadden, formerly of Goonellabah, was recognised for service to the community of Lismore.
Darcy was an amazing man who contributed more than 60 years of voluntary service to his community.
He was with the Lismore Apex Club for 14 years and when he was no longer able to be a part of Apex, he joined the Lismore Lions in 1972 and took on various positions, including president, until 2018 when he ‘retired’ at age 89.
Darcy helped establish the restaurant at House With No Steps at Alstonville, providing work for people with a disability.
He fought to protect the Lions Memorial Fountain outside Lismore City Hall and helped form the Lismore Heights Probus Club.
Darcy and his wife Teresa would act as chaperones for the North Coast Children’s Home, taking kids on trips to the beach and other outings.
Darcy and Teresa were married for 62 years and have four children.
Teresa said Darcy was very highly regarded by his local community and all who knew him.
“He has been involved in service to his community for more than 60 years,” she said.
“His children were members of the Lismore 3rd Group Scouts and he was president of Lismore 3rd Group Scouts.
“Throughout these 60 years he has worked tirelessly for his community, as a volunteer as well as contributing his many skills to organisations and groups whenever requested.
“There are many people who would be able to state that Darcy assisted them to gain employment in the local area, when they were young.”
Darcy was born in Coraki and lived at Woodburn with his nine brothers and sisters.
“Darcy had a genuine love for people and liked nothing more than to have a chat and get to know people,” Teresa said.
“Darcy was a genuine, very modest person with great integrity and the ultimate gentleman.
“He never sought accolades for himself.”
Other than his love for his family and community, Darcy had a passion for photography.
In 1947, at just 16, Darcy obtained a position at The Northern Star newspaper as an apprentice in processing and engraving in the photography department.
When it was necessary for some photography to occur and a shortage of staff, Darcy would be asked to go out and take photos occasionally.
He had a natural talent for photography, and he accepted the position of photographer at the paper when he was 18.
When he first started working, his hours were from 1pm to 10pm as the photographs had to be prepared and developed for the overnight printing.
He would travel all over the Northern Rivers to capture the news, from Ocean Shores to Mclean and west to Bonalbo.
He photographed the queen when she visited Lismore in 1954.
“He was the unofficial photographer for local police for many years,” Teresa said.
Darcy fulfilled the position of unofficial police photographer in the district as there was not a police photographer appointed to this area.
This involved some horrific murders, the Cowper and Clybucca bus crashes, many major fires, floods including the devastating major floods of 1954 and 1974 and car accidents.
A police officer arrived in Lismore to establish a scientific department for the police department, however, there was not the necessary photographic area set up.
Darcy organised for the police department to utilise the photographic department at the newspaper.
At the official opening of the Police Scientific Department, the officiating officer stated that Darcy had proved to him “the need to establish this facility”.
He handed in his resignation from the paper when he was 75. However, the editor requested that he continue to work, so Darcy accepted the position to work on special projects, which he did until her was 79.
Darcy passed away last year.
Other recipients:
Emeritus Professor Baden Offord, from Ocean Shores, is now an officer in the Order of Australia for his distinguished service to tertiary education in the field of human rights, social justice, and cultural diversity.
Scott Monaghan, from Mylneford, is now a Member of the Order for his significant service to indigenous health, and to medical research.
Carol Bonamy, from McLeans Ridges, has been awarded an Order of Australia medal for her service to the community of the Lismore region.
The late Donald Phillip Ellison, formerly of Ballina, has been awarded an Order of Australia medal for his service to horticulture.
John Lee, from Bilambil Heights, has been awarded an Order of Australia medal for his service to the community through social welfare organisations.
John McCaffrey, from Wollongbar, has been awarded an Order of Australia medal for his service to people with disability.
Kim Rhodes, from Tenterfield, has been awarded an Order of Australia medal for her service to the community of Tenterfield.
Dominic Richards, from Cabarita Beach, has been awarded an Order of Australia medal for his service to architecture, and to the community.
Chris Hemsworth, from Byron Bay, has been awarded an Order of Australia medal for his significant service to the performing arts, and to charitable organisations.